A soldier’s Service Book can hold important clues as to how they spent their time in the military, the trouble is that the cursive writing, codes, abbreviations and acronyms can be puzzles in and of themselves. Here is one example of decoding a page in a WW2 soldier’s Service Book who took part in the invasion of Normandy. If you are attempting to decode a Service Book yourself, you can start with the Abbreviations page of our Research section, and post any questions in our Forums.

B13817
X-Ray Chest Neg., 7 Sep 43
BLOOD DONATION, 9 Nov 43
BLOOD DONATION, 4 Jan 44
Enlistment leave 7 days, 13-9-43
Christmas Leave 5 days, 23-12-43
These entries are mostly self-explanatory, the soldier being tested upon enlistment, donating blood and receiving some leave (free time). The number at the top of this page, B13817, remains a mystery to me. It’s not this soldiers Regimental Number, please leave a comment if you know or discover what this number may be.

CAP & DM Chamber, 26/11/43
Gas Compound Chlorine, 9 Feb 44
These two entries detail chemical weapon (gas) training. The use of the gas chamber to test if Service personnel could fit their respirators properly dates back to 1918. Servicemen fitted their respirators, entered the chamber and walked round for 5 minutes in an atmosphere of tear gas. After leaving the chamber, respirators were worn for a few more minutes to allow gas to dissipate from clothing. Special capsules of CAP, an early tear gas, were issued for this training. This routine was augmented in 1935. After going through the procedure to check respirators had been fitted properly, each man briefly re-entered the chamber without protection as a demonstration of the protection afforded by the respirator.

By 1941 all Service personnel went through this respirator test and unprotected exposure every three months. Personnel were also required to experience a nose gas, DM, so that they might be able to recognise the gas and appreciate its delayed action effects.

Personnel were exposed to DM for two minutes: no-one was required to experience DM more than once. These arrangements continued after World War II.

The requirement to experience DM ceased in 1963. CAP, or CN as it was also called, remained in use as a riot control agent until the late 1950s, when it was replaced by CS. By 1964 CS was being used instead of CAP in what became known as the “CS chamber” test. Every member of the Armed Services was required to undergo the test. The test continued through the 1980s, by which time most permanent military stations and training camps had a CS chamber. *

Fingerprinted 10, Sep 43
MFM 182 Identity Card issued, Jan 44
During the Second World War, every member of the Canadian Army was fingerprinted, photographed and the details recorded on Militia Form M 181. This form when filled out, was photographed by a special camera, the Monroe Duo Camera. The Monroe Duo Camera took a picture of the soldier and a portion of the MFM 181 at the same time and created a negative, which when developed, was sealed in plastic, then stamped with an embossed seal. This became the Soldier’s Identity Card, MFM 182. **

P.L. 9 DAYS F.T.W., 19/12/44
P.L. Privilege Leave
F.T.W. Free Travel Warrant
The position of this entry in the Service Book leads me to believe that the date was recorded in error, potentially intended to be 19/2/44. Privilege Leave was granted to soldiers after they had served a certain amount of time. A Free Travel Warrant allowed a soldier to travel, usually by train, free of charge.

SOS to X3 line-RCAMC, 30 JUN 44
S.O.S. Struck Off Strength
X-3 All ranks evacuated on medical grounds behind Regimental Aid Posts
R.C.A.M.C. Royal Canadian Army Medical Corps
Struck Off Strength means that the soldier left, or otherwise ceased to be the responsibility, of the unit they were with — that unit has lost strength. The X3 here indicates that he was injured or was otherwise transferred on medical grounds. The Royal Canadian Army Medical Corps supported the 3rd Canadian Infantry Division during the invasion of Normandy so it makes sense that an injured soldier would be transferred to them.

The story that this Service Book tells is that of a soldier who enlisted, trained, was sent to the U.K., landed in Normandy on D-Day, took part in the invasion of Normandy during the month of June 1944, was injured and subsequently evacuated. 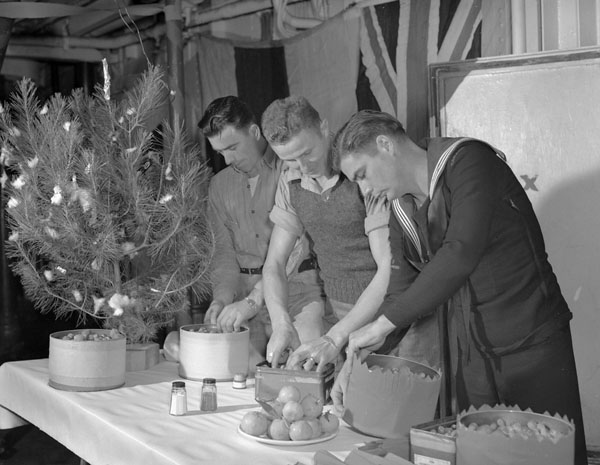