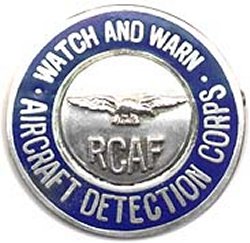 Cliff Chadderton provides this introduction to the Aircraft Detection Corps.

"The story of the Aircraft Detection Corps (ADC) during WWII is largely unknown to Canadians. It is the story of the eyes and ears of those charged with defending our shores. At the outbreak of World War II, Canadians faced the possibility that enemy aircraft could enter the country's airspace without being detected. There was no radar alert system at that time. The country's vast spaces meant the Home War Establishment would need assistance. As a result, the Aircraft Detection Corps was formed in 1940 by Air Vice-Marshal George Croil.

As the war progressed, the enemy threat came not only from the air but also from the sea. The most effective observers beyond our shores were fishermen. They were considered already trained observers and were of valuable assistance to the Aircraft Detection Corps. Many areas were vulnerable to enemy attack, including Halifax Harbour, the Gulf of St. Lawrence, the Hudson Bay area, the great canal locks at Sault Ste. Marie and the vast BC coastline.

In all, close to 30,000 Canadians signed up for the ADC.. Housewives, school children, fishermen and lighthouse keepers became official observers for the ADC (RCAF). Their job was to scan the skies and seas and report any suspicious sightings of aircraft and vessels – even spies.

The Aircraft Detection Corps was disbanded toward the end of the war when the action in the Pacific moved closer to Japan and also when the radar along the coast was so effective that human observers were no longer seen as necessary".

The Air Detection Corps was divided into three regional units, placed respectively under Western Air Command (WAC), Eastern Air Command (EAC) and, in central Canada, the RCAF HQ. From the Atlantic to the Pacific, 2,692 observer posts were active, decreasing in number as the war progressed. In places where there was no telephone service, radios such as the model ADC-19A were used and issued to mostly to marine people and light house operators. The low power output and the daytime operating frequency did not give these radios much range, so it is assumed the observers were not too distant from an RCAF reporting centre. Doug Betts, an ADC volunteer estimates that perhaps 250 of these radios were built and issued to the ADC.

The ADC’s military personnel made sure that enough civilians were watching the skies in areas that enemy bombers or reconnaissance planes could enter. The ADC handed out documents to assist in identifying the different types of aircraft; telephone companies did their part as well by transmitting free of charge messages intended for ADC stations. Enemy air raids against Canada were so few that ADC volunteers had little opportunities to distinguish themselves. But their reports were useful to locate lost aircraft and the information they provided increased the efficiency of rescue missions.

At war's end, the RCAF, on behalf of a grateful government, presented some 24,000 sterling silver pins and certificates of appreciation to ADC members.